July 5th 2015...I am catching up - I have found a hostel which is conducive to being productive in Phnom Penh :)


Whilst more thorough and descriptive blogs of my time in Melaka (Malacca) will be coming in the next day or two, when planning out those blogs, I found that the night market I visited on my first evening in the city did not easily fit into the narrative, but that there were plenty of photos that I share of that enjoyable evening.


My solution was to have a separate post just for the night market.


I feel I should give a little background here. The night market in Melaka, which runs along the temporarily pedestrianised Jonker Street, is one of the major attractions of the city, and only runs on Fridays, Saturdays and Sundays. The market stretches for nearly a kilometre, and is a combination of food stalls, clothing stores, and tourist souvenirs. The market even retains some original stalls targeted at locals, selling knifes, vegetables and toiletries, and as a result, the market has a healthy mix of locals, Malaysian visitors, and foreign tourists, though like everywhere in Malaysia, the Chinese tour groups dominated.


I had not planned to tackle the night market on my first night, as I was tired, in need of a shower, and had only arrived at around 9pm. But it was a Sunday, and if I did not go tonight, I would have had to wait until Friday, or more likely, forgo seeing it. I like a good night market, and this one was famous, and so I was determined not to miss it. I dumped my bag by my bed, and headed out to see what there was to see (and eat).


The market was brightly lit up with flourescent lighting, and stalls tumbled from their respective stores lining the street out over the pavement into the road. Hawkers called out the names of their produce in various Malaysian languages, whilst tourists and visitors browsed in mild confusion the kaleidoscope of goods on offer.


Waiting at the end of the street near the bridge was a fleet of neon-bedecked trishaws which supported glowing effigies of Hello Kitty and other Asian cartoon characters. The picture below cannot capture the cacophony of noise as speakers on each stereo blared out their owner's taste in music: Korean K-Pop blared over the warbling of Chinese karaoke pop opera, while Miley Cyrus could be heard proclaiming that she would not stop. It was not a pleasant sound. 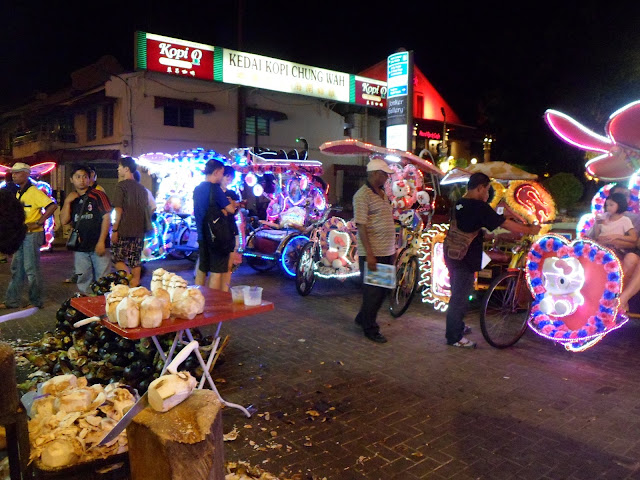 Next to the overwhelming rickshaws were several stalls selling coconuts and coconut ice cream. I could not resist the idea of a coconut shake. 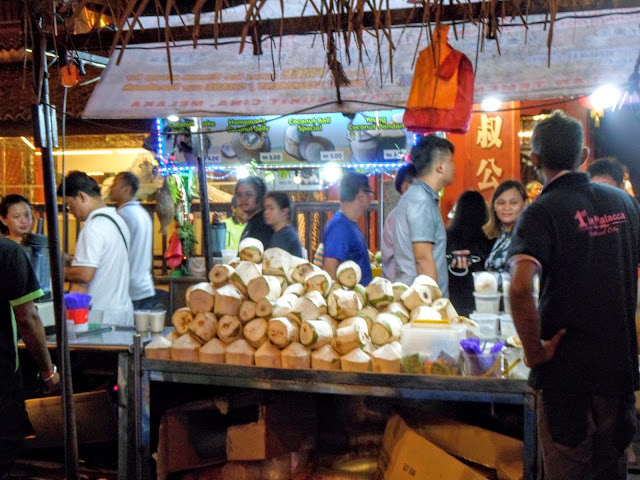 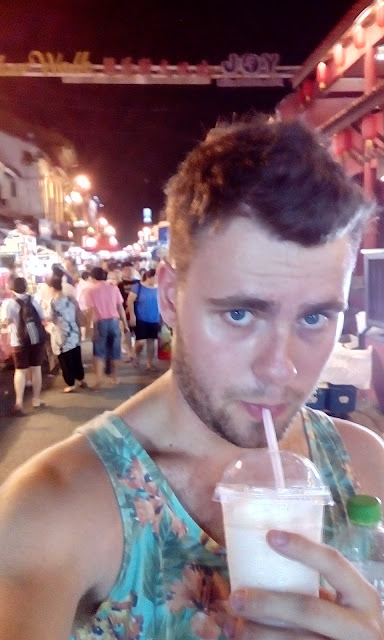 Then I found an unassuming stall selling 'pumpkin cake' which I was intrigued, as it was only RM2 (£0.33). I decided to buy a piece, and was then amazed when I got not one piece but three, fist-sized lumps for the price.

I should have known that when they asked if I wanted chilli sauce with the cake that it would not be my thing. It was rubbery and jelly-like at the same time, and had a strange lack of taste, which suggested it had been made with unripe pumpkins.

My next purchase after a few minutes was at this stall which proclaimed' Fruit Candy Stick'. I was intrigued as I had not seen this before, and so I bought one to try it. The fruit was prepared in a similar way to a toffee apple back in the UK, and was quite effective with strawberry and pineapple. Slightly odd with grapes though. 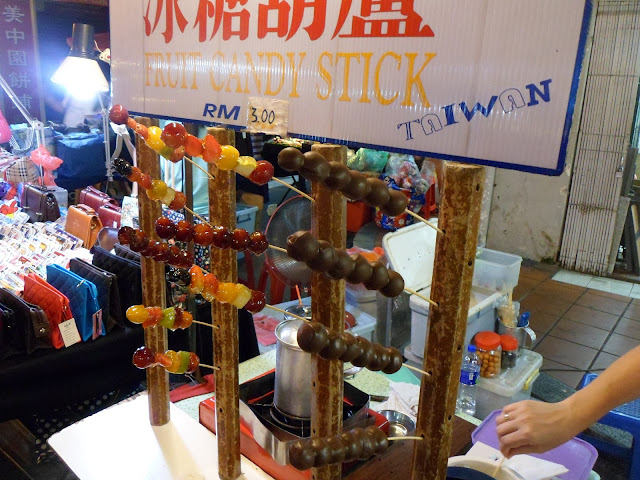 
My next stop was at a Taiwanese stall selling sausages. Among the flavours they had available, Honey Lime sausages sounded by far the most delicious, so I bought one. 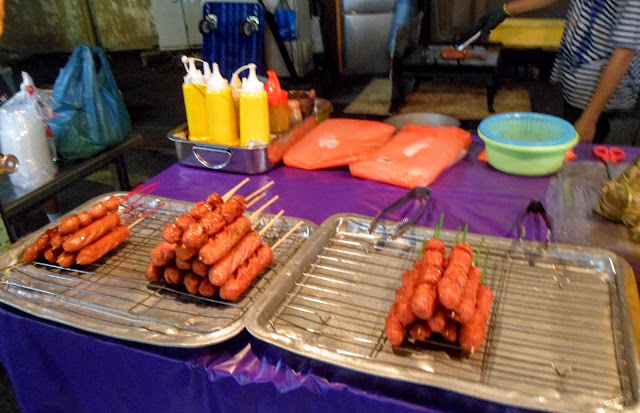 It was without doubt one of the most delicious sausages I have ever tasted, as the sweet honey compliment the salty pork meat, and the lime cut through it all with a sour burst. It may not be to everyone's taste, but I loved it. 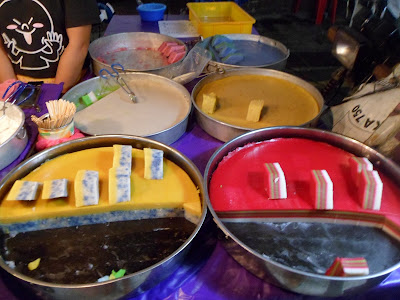 The stall also sold pieces of strange cake-jelly, which after the experience with the similar pumpkin cake, I declined to try, but it looked fairly appealing.

I briefly paused in my attempt to efforts to eat everything in sight to watch the karaoke performed by locals on a large stage towards the far end of the market. As the songs were mostly in Chinese, I was unsure whether they were doing a good job or not, though the apathy of the audience suggested they at least were not spectacular. Personally, I was more distracted by the advert behind the warbling singers showing footballers advertising Mister Potato crisps (they are basically mock-Pringles). It rather made the whole affair less cultural and more commercial! 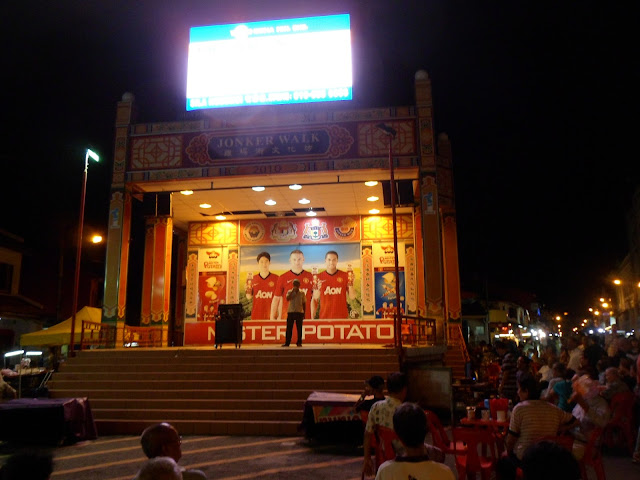 Some of the stalls in the market used some odd phrases in English, and a couple were downright bizarre. This durian stall below selling 'Normal Clones' was particularly odd. 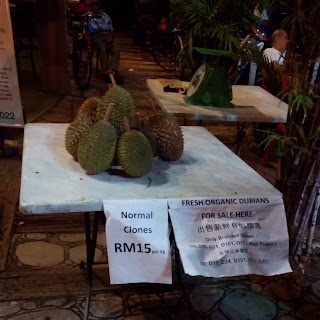 Whereas I feel 'Big Tart: Cookies and Bread Station' was a rather deliberate use of English. In Malaysia, there are so many competent English speakers, but equally so many Malaysians unable to speak much English at all, that it is sometime hard to know whether the mistake is intentional or accidental. 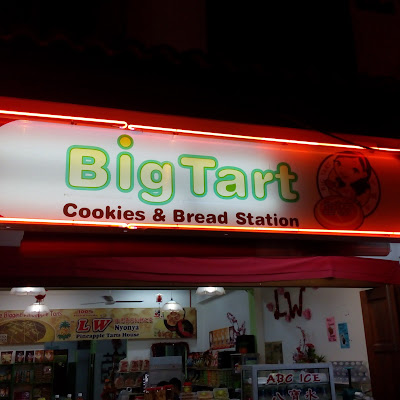 By now, it had been about ten minutes since I had eaten anything, so I found myself some miniature octopus on a stick to chew on for just RM 2 (£0.33). It was delicious and spicy, and made me miss the cheap seafood of Thailand. 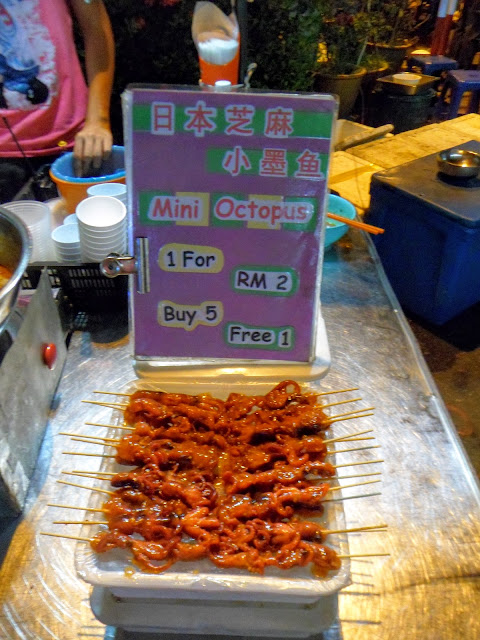 My final snack of the night was these amazing fritter-like objects photographed below. 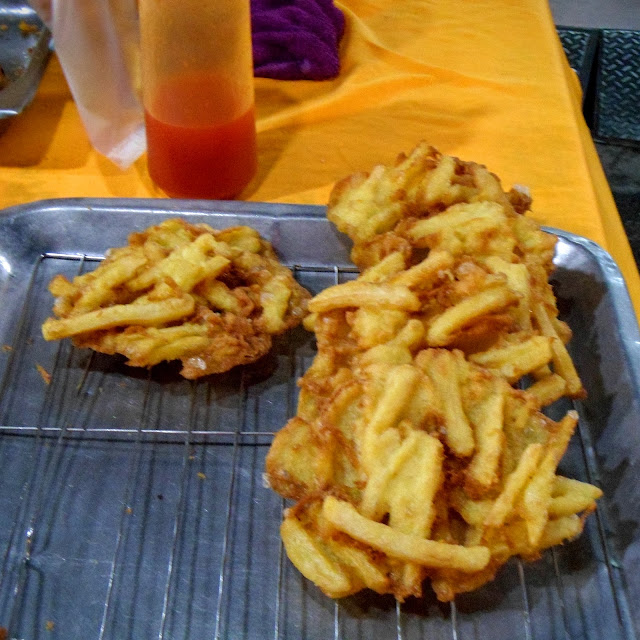 They consisted of ready-cooked chips dipped in batter and re-deep-fried, which turned them into an unhealthy, salty, fatty potato fritter, or a super hash brown! It was incredibly delicious, and reminiscent of Chipsy Mayai (Egg Omelette) which I had loved when I visited Tanzania just under four years ago. 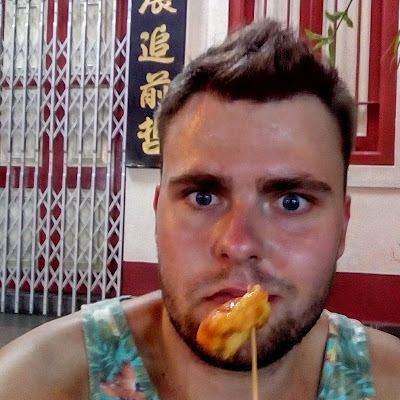 After I had demolished several chip fritters, I was really feeling full. I continued back through the market towards my hostel, briefly stopping to pick up some Peach tea from a vendor, before I turned off down a side street back to my hostel for a well-earned sleep.